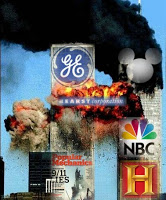 Documentary set up bias straw man arguments, ignored key evidence, afforded debunkers overwhelming majority of time - so-called "experts" Popular Mechanics are on the same corporate payroll as the History Channel itself, which is owned by Disney, GE and Hearst Publishing

from paul joseph watson: Initial reaction to last night's two hour History Channel Special on the 9/11 truth movement was vehement and conclusive - the show was nothing more than another biased hit piece that manufactured straw man arguments, ignored key evidence, and afforded debunkers to talk at length while ridiculing any other viewpoints.

According to viewers who were unfortunate to have to sit through 120 minutes of yellow journalism, the program was very similar to a previous BBC hit piece - an outright smear attempt that abandoned any pretense of neutrality early on and sought to vigorously attack so-called conspiracy theories.

Though producers of the show promised Alex Jones directly that the documentary was not going to be a hit piece, according to viewers it was replete with distortion and deception, all delivered in the kind of condescending tone we have become used to from the establishment media.