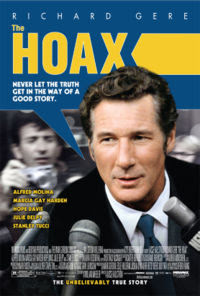 from you tube: Inspired by true events in the life of Clifford Irving, the writer who nearly pulled off one of the most audacious media scams in history, when his "autobiography" of Howard Hughes was published. Richard Gere stars as Irving, who claimed the book was based on in-person interviews with the reclusive billionaire, which were in fact completely bogus.

from lisa pease: Every now and then a little Real History sneaks into the cinema. The movie "The Hoax" tells the story of Clifford Irving's attempt to sell an "autobiography" of Howard Hughes written with or without the help of the man himself...

According to screenwriter William Wheeler, several people in a position to know think Robert Maheu, the CIA man chosen to head the Castro assassination plots, who also worked with Hughes for years, aided Irving in his project with the goal of getting that damning Hughes loan to Nixon info to the public. Seeing as the CIA was definitely working against Nixon during his second administration, this theory makes sense.

Nixon had already lost his race for the Governor of California in 1962 when a $200,000 loan from Hughes to his brother was made public. When Nixon realized that the more recent Hughes loan to Nixon via Bebe Rebozo would be made public through Irving's book, the White House got very nervous. The film strongly implies this concern was a direct motivation for the Watergate break-in. As regular readers remember, this is my theory as well re the original reason for the break-in (but see my long article on Gerald Ford, Watergate, and the CIA for the reason why I think the break-in itself was sabotaged).

I won't say more as these are already spoilers, to some degree. But go see the film when it opens in April. Richard Gere has a blast playing this very colorful character, and gets to impersonate Howard Hughes in the process as well. The film has hilarious moments and other more provocative ones. But in the end, it's just great entertainment with a little historical flair.

listen to lisa pease on episode316 of black op radio