hollywood to frame iran for lockerbie

from press tv: Hollywood and Israel join hands to blame Iran for masterminding the Lockerbie disaster in a new cinematic adaptation of the event.

The film will be based on a book by Juval Aviv, the former Israeli secret agent and a top investigator for Pan American during the Lockerbie inquiry.

According to the Scotland on Sunday website, Flight 103 which will hit the market on Jan. 24th, 2008, accuses the Iranian and American secret services of involvement in the incident.

The former Mossad agent has negotiated the film rights with a number of high-profile Hollywood directors including the acclaimed Steven Spielberg, who had hired him as a consultant in 2005 for his award-winning film Munich.

Lockerbie is a town located in south-western Scotland, which is internationally known as the wreckage site of the Pan Am Flight 103 which crashed on Dec. 21, 1988 as a result of a terrorist bombing.

In 1991 Libyan intelligence agent, Abdelbaset ali Mohmed al-Megrahi was charged with planting the bomb and was sentenced to life imprisonment in Jan. 2001.

Steven Spielberg is a prize-winning American filmmaker, who is famous for international box office hits such as Jaws, E.T, and Jurassic Park.

from hemar enterprises: Investigation into the downing of Pan Am Flight 103 over Lockerbie, Scotland. Produced back in 1994, this film raises serious questions about what really happened.

do you know the truth about lockerbie?

from robert fisk: After writing about the “ravers” who regularly turn up at lectures to claim that President Bush/the CIA/the Pentagon/Mossad etc perpetrated the crimes against humanity of 11 September, I received a letter this week from Marion Irvine, who feared that members of her family run the risk of being just such “ravers” and “voices heard in the wilderness”. Far from it.

For Mrs Irvine was writing about Lockerbie, and, like her, I believe there are many dark and sinister corners to this atrocity. I’m not at all certain that the CIA did not have a scam drugs heist on board and I am not at all sure that the diminutive Libyan agent Megrahi – ultimately convicted on the evidence of the memory of a Maltese tailor – really arranged to plant the bomb on board Pan Am Flight 103 in December 1988. 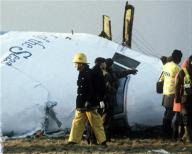 from reuters: Lawyers for a Libyan man convicted of the 1988 Lockerbie airline bombing demanded access on Thursday to evidence from an unnamed foreign state which they believe could undermine the case against him…

Media reports had suggested the missing document, which has never been shown to the defense, was supplied to the prosecution by the U.S. Central Intelligence Agency and its disclosure could help clear Megrahi, serving a life sentence in a Scottish jail.