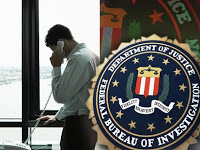 from washington post: The FBI, which has had trouble keeping track of its guns and laptops, also has a chronic problem paying its phone bills on time, according to audit results released today. Telephone companies have repeatedly cut off FBI wiretaps of alleged terrorists and criminal suspects because of failures to pay telecommunication bills, including one invoice for $66,000 at one unidentified field office, the audit found... "Late payments have resulted in telecommunications carriers actually disconnecting phone lines established to deliver surveillance results to the FBI, resulting in lost evidence," Fine wrote in a seven-page summary of the audit's findings.

from threat level: The FBI routinely failed to pay telecom companies promptly for providing phone and internet lines to the FBI's impressive domestic surveillance architecture - resulting in at least one phone company cutting off a foreign intelligence wiretap until the FBI paid its bill, according to an audit released Thursday. The Justice Department's Inspector General also found that telecom charges and invoices for surveillance overwhelmed the FBI's ability to keep track of their bill and that one field office got a $66,000 bill from a carrier for unpaid surveillance work. Some of the problems stemmed from telecoms billing multiple times for individual surveillance warrants - which, in the case of Cox Communications, costs $1500 for a 30-day wiretap order. But telecoms also bill the FBI for internet connections and phone lines that connect the carrier's wiretap-friendly switches with the FBI's wiretap software system known as the Digital Collection System.