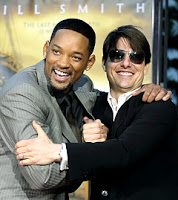 from ny daily news: Will Smith has joined the ranks of Hollywood power players actively recruiting for the Church of Scientology... Smith, who is best buddies with Scientology booster Tom Cruise, has never confirmed that he joined the church. But he told "Access Hollywood" last month: "I was introduced to it by Tom, and I'm a student of world religion. I was raised in a Baptist household. I went to a Catholic school, but the ideas of the Bible are 98% the same ideas of Scientology, 98% the same ideas of Hinduism and Buddhism." Presumably the other 2% is the part about the evil space emperor who put the hydrogen bombs in the volcano.

from east london advertiser: Robot drones may be used by the RAF for surveillance and intelligence-gathering during the 2012 Olympic Games, it has emerged. The drones, which are fitted with infra-red sensors and electronic eavesdropping equipment, will be able to provide a bird's eye view of the crowds across East London. The proposal has raised feared on the London Assembly that the Government is planning to turn the capital into a 'mini police state' while the Games are on.

from danger room: Smokey the Bear now packs a stun gun. That's right. The U.S. Forest Service recently purchased 700 Tasers for its rangers. And at least one group of federal workers is none too happy about the development. Public Employees for Environmental Responsibility, or PEER, says the $600,000 stun gun buy isn't justified, when the Forest Service is struggling financially.

from huffington post: A former Goldman Sachs associate who was accused of masterminding one of the broadest insider-trading conspiracies in years was sentenced on Thursday to nearly five years in prison... Eugene Plotkin... was sentenced to four years and nine months by a federal district judge in Manhattan. The sentence was the minimum under a plea agreement. Mr. Plotkin's arrest in April 2006 was the first of a number of insider-trading cases brought by federal prosecutors and the Securities and Exchange Commission that year and 2007.