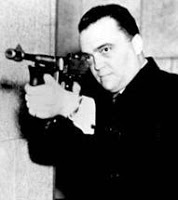 from raw story: According to a newly declassified document, the New York Times reports, a plan by former FBI director J. Edgar Hoover sought to suspend habeas corpus during wartime, with the intention of imprisoning thousands of Americans indefinitely.

Hoover’s plan was submitted to the White House twelve days after the start of the Korean War. Under the plan, approximately 12,000 people deemed as “potentially dangerous” to national security, 97% of whom were American citizens, would have been rounded up and sent to military prisons without due process.