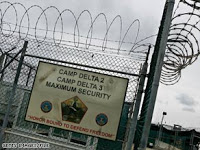 from ap: A Saudi terrorism suspect facing possible charges before a military tribunal at Guantanamo has been identified as a brother-in-law of one of the Sept. 11 hijackers.

Ahmed Mohammed Ahmed Haza al-Darbi, who is accused of helping to organize an al-Qaida plot to attack a ship, is a brother-in-law of Khalid al-Mihdhar, a Saudi who was one of the hijackers who crashed a plane into the Pentagon, the military said in a statement late Friday.

Al-Darbi, 32, faces possible charges that include conspiracy and providing support to terrorism and could be sentenced to up to life in prison if convicted by the military court at the U.S. Navy base in southeast Cuba.