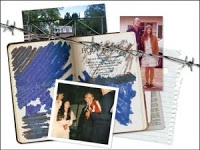 from mother jones: New Beginnings describes itself as a character-building facility for "troubled teens," and what Jeannie Marie heard in church that day was that this might be a place for her daughter to heal..."It sounded like a discipleship program," Jeannie Marie recalls. "A safe place where a daughter can go to have time alone to find God and her direction." Instead, Roxy found herself on the receiving end of brutal punishments. A soft-spoken young woman, blonde and blue-eyed with a bright smile, Roxy confided to me that she found it easier to discuss her ordeal with a stranger than with the people closest to her. She told me how, in her first weeks at the academy's Missouri compound — a summer-camp setup in remote La Russell, population 145 — she and other girls snuck letters to their parents between the pages of hymnals in a local church they attended, along with entreaties to congregants to mail them. When another girl snitched, Roxy said, McNamara locked some girls in makeshift isolation cells, tiled closets without furniture or windows. Roxy got "the redshirt treatment": For a solid week, 10 hours a day, she had to stand facing a wall, with breaks only for worship or twice-daily bathroom trips. She was monitored day and night by two "buddies," girls who'd been there awhile and knew the drill. They accompanied her to the shower and toilet, and introduced her to a life of communal isolation and rigid discipline. Girls were not allowed to converse except from 6 to 9 p.m. each Friday. They were not allowed contact with their families during their first month, or with anyone else for six months. By that time, Roxy said, most girls are "broken," having been told that their families have abandoned them, and that the world outside is a sinful, dangerous place where girls who leave are murdered or raped.