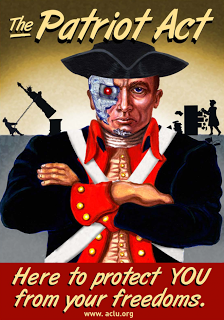 from threat level: The House voted Monday to extend to December three expiring provisions of the Patriot Act spy legislation. The measure’s passage, by a 275-144 vote, was expected. The three provisions are expiring at month’s end. Rather than seriously debate or alter them, the House punted — the third failure by Congress in more than a year to address the law’s controversial issues. The measure now goes before the Senate, which is likely to follow the House’s course on legislation that was hastily adopted following the September 11, 2001, terror attacks. Here are the expiring provisions the House adopted:

• The “roving wiretap” provision allows the FBI to obtain wiretaps from a secret intelligence court, known as the FISA court (for Foreign Intelligence Surveillance Act), without identifying the target or what method of communication is to be tapped.

• The “lone wolf” measure allows FISA court warrants for the electronic monitoring of a person for whatever reason — even without showing that the suspect is an agent of a foreign power or a terrorist. The government has said it has never invoked that provision, but the Obama administration said it wanted to retain the authority to do so.

• The “business records” provision allows FISA court warrants for any type of record, from banking to library to medical, without the government having to declare that the information sought is connected to a terrorism or espionage investigation.

flashback: 'patriot act' extensions down, but not out