despite reports, ibm programmers now backpedaling & saying that 'watson' did not crash during 'jeopardy!' 4hr taping... 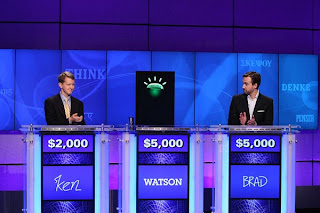 from john c. dvorak of no agenda: When Watson failed to answer the Final Jeopardy! question correctly during the Tuesday Jeopardy! game show, yet still won the round, I realized my Monday column, predicting that the humans would be victorious, was wrong. While there is no doubt that this machine is a fantastic accomplishment, the Jeopardy! competition is skewed in favor of the Watson's fast buzzer clicker. I'd like to see a show consisting of nothing but Final Jeopardy! Q&A. You could clearly see the two men pushing their buzzers once the question was read, but the giant computer was getting the question electronically and could react faster than the other contestants. I mean, it's not as if the two men don't know the answer to these weird questions. So at the end of the last round tonight, you can be certain that the computer will have amassed a huge amount of money, unless they do something very strange like ask the questions in Pig Latin. Meanwhile, I cry foul because this contest gives an edge to the machine by making response time a key element. People versus machine, insofar as response time is concerned, is unfair. Make the machine have to read the question with a camera, and then it would be fair. Anyway, what IBM has done is quite remarkable. I now have no doubt that the machine will be the winner. My assertion on Monday was wrong, and I know why it was wrong. It's rigged.

video update: watson supercomputer wins at 'jeopardy!'*
machines beat us at our own game: what can we do?*