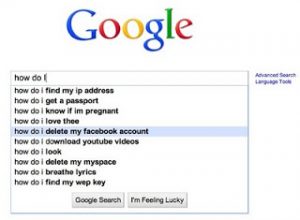 from read write web: Facebook doesn’t make it easy to delete your account, but a growing number of people appear to be turning to Google to find out how to do just that. Google Suggest, the drop-down box that offers suggested search query completions based on absolute and recent upticks of popularity, now guesses that if you start typing “How do I…” that you’d like to know how to quit Facebook. Note that deactivating your account, something that Facebook responds to in a pretty shocking way as well, is not the same as deleting it.

Search maven Danny Sullivan noted the suggestion on Twitter this morning, but a growing number of industry watchers are talking about people deleting their Facebook accounts. Some, including at least two members of our own staff, have already done so. Google Suggest suggestions are often humorous, but the screenshot below is pretty serious stuff.

So how do you delete your Facebook account? Even that is pretty remarkable! According to the #1 search result for the query, which is an unofficial Facebook group page written by someone else, you have to visit facebook.com/help/contact.php?show_form=delete_account. On that page you’ll find a delete button. According to said unofficial group, you’ll still be able to bring your account back if you log-in within the next two weeks! You won’t show up in search results though, neither in Facebook nor in Google. It’s as if they can’t see you anymore.

“It was terribly dangerous to let your thoughts wander when you were in any public place or within range of a telescreen. The smallest thing could give you away. A nervous tic, an unconscious look of anxiety, a habit of muttering to yourself-anything that carried with it the suggestion of abnormality, of having something to hide. In any case, to wear an improper expression on your face…; was itself a punishable offense. There was even a word for it in Newspeak: facecrime…” — George Orwell, 1984

For the record, I have not deleted my Facebook account as I enjoy the service too much and feel the need to keep an eye on its innovations and transgressions. You can subscribe to ReadWriteWeb’s good news and bad news about Facebook and the rest of the web here on Facebook.