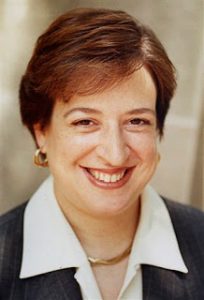 from kurt nimmo: Democrats are going gaa-gaa over Obama’s Supreme pick Elena Kagan. “Democrats praised Kagan as ‘razor sharp’ and impeccably qualified for the lifetime appointment on the nine-member bench, but Republicans promised to vigorously vet a ’surprising’ choice, noting she had never been a judge,” reports Agence France-Presse. “I have selected a nominee who I believe embodies… excellence, independence, integrity and passion for the law, and who can ultimately provide that same kind of leadership on the court,” Obama said at the White House.

Is Kagan independent? Hardly. She is a bankster operative.

Obama mouthpiece Robert Gibbs and the Justice Department are now engaged in frenetic damage control over Kagan’s Goldman connection. Kagan’s role working for the “great vampire squid wrapped around the face of humanity” (as Matt Taibbi described Goldman) should not be dismissed lightly. Kagan will obviously serve the interests of the banksters if she makes it to the Supreme Court (adding to the corporatist influence already well entrenched there). Republicans need to hammer Kagan on this during her confirmation hearing. But then Republicans are the right hand on the zombie One Party grocery clerk known as Congress. Difficult questions will not be asked.