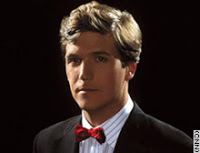 from raw story: A 2006 poll about the causes the causes of 9/11 - which indicated that more than a third of Americans suspect government involvement in the tragedies - is too "frightening" for MSNBC's Tucker Carlson to even think about.

Discussing the booting of a 9/11 Truth heckler from the audience of last week's edition of Real Time with Bill Maher, Carlson brought up the year-old Scripps Howard/Ohio University survey to underscore how "almost unbelievable" it was that so many people bought into conspiracy theories.

When the Washington Post's Eugene Robinson, a guest on the show, mentioned that he received frequent emails from individuals accusing the mainstream media of hiding the truth about Sept. 11...

"That's so evil," he continued, "how could you still live in this country if you believe that?"

Responding to a suggestion that cynical Americans were "ready to believe just about anything negative" about their government, Carlson proposed that those individuals might want to skip the country.

"If you have a population that stupid and reckless and they're in charge of the government, maybe it is time to leave the country," he said. "I don't even want to think it through it any more. This is why we never do this topic on the show. It just upsets me too much. I don't want to know these kind of facts about America."

The following video is from MSNBC's TUCKER, broadcast on October 22, 2007