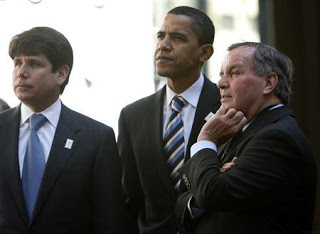 the chicago machine's corruption hits the fan, as webster tarpley predicted, in this twisted tale of "operation board games" that has connections to rezko, auchi & bankster's revenge...

from washington post: FBI agents this morning arrested Illinois Gov. Rod R. Blagojevich (D) and his chief of staff on conspiracy and bribery charges, including allegations that the governor was seeking to benefit financially from his appointment of a successor to the U.S. Senate seat that was vacated by President-elect Barack Obama. The arrest of Blagojevich, 51, and his top aide, John Harris, 46, capped a lengthy investigation into public corruption at the highest levels of state government. The two men later appeared in a federal courthouse in Chicago before U.S. Magistrate Judge Nan Nolan, who ordered the governor's release on $4,500 bond. Blagovich, appearing in court in sweat pants, gym shoes and an athletic shirt, was also ordered to relinquish his passport and his firearm owner's identification card, the Associated Press reported. "This is a sad day for government," U.S. Attorney Patrick J. Fitzgerald told a news conference in explaining the charges. "It's a very sad day for Illinois government. Governor Blagojevich has taken us to a truly new low." Blagojevich was arrested in the middle of a "political corruption crime spree," the prosecutor said, adding, "We acted to stop that crime spree."

video: chicago reporter suggests emanuel may have ‘tipped’ off federal investigators about blagojevich

blagojevich suspends state business with bank of america & is promptly arrested by fbi on corruption charges
from cryptogon: Less than 24 hours later… Whamo. I’m not saying that the guy isn’t a crook. He could be as crooked as the day is long. The timing of his arrest, however, is priceless.

blagojevich arrested on corruption charges after going up against bank of america
from kurt nimmo: Isn’t it odd that Illinois Governor Rod Blagojevich is suddenly arrested on corruption charges the day after he announced he is asking all Illinois government agencies to suspend business with Bank of America? Not really. Blagojevich’s arrest sends a strong signal that going up against the banksters will not be tolerated. “Blagojevich contended that Bank Of America received a multi-billion dollar bailout from the government and should accordingly restore credit to the Republic Windows & Doors company in Chicago,” writes Katharine Zaleski for the Huffington Post.