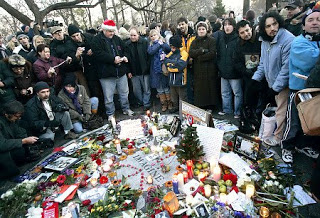 from nydailynews: It was 28 years ago today that singer/songwriter John Lennon was fatally shot outside his Upper West Side apartment building by a deranged fan. Every year since the tragic event on Dec. 8, 1980, fans have gathered to pay tribute to the gifted musician near the site of the shooting. Despite the bitter temperatures, hundreds of people are expected to gather later today at Strawberry Fields - the memorial garden in Central Park that was created as a tribute to the ex-Beatle in 1985. It is located across from the Dakota, where Lennon lived with Yoko Ono when he was killed.