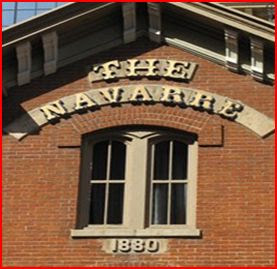 Stew Webb, a Federal whistle-blower in Colorado, watches dates June 21 and December 22 - the summer and winter solstices closely for activities at The Navarre (picture).  Webb reports in recent Veterans Today article:   "Denver Colorado on June 21 and December 22 each year at 12:00am-3:00am
mountain time known as the 'Summer and Winter Solstice' the Illuminati
Council of 13 Bankers hold their 'Tiffany Lamp meetings'. These known
Satanists perform Human Sacrifices as part of their satanic rituals at
the Old Navarre a former Whore House and Casino
located at 1725-1727 Tremont Pl, Denver, Colorado, across from the
Ships Tavern at the Brown Palace Hotel in downtown Denver, Colorado." The article goes further to identify known members of "Council of 13 Bankers":  "This group is known as the Illuminati Bankers the U.S. 'Shadow
Government'  leaders who dictate U.S. World Policy, that are known as
Satanists, George HW Bush, Leonard Millman, Larry Mizel, Henry
Kissinger, Meyer Rothchild, David Rockefeller, Grace of Grace and
Company, Answer Bin Shari the head Rabbi of Israel and others unnamed.   Webb clearly explains nature of ceremonies performed on solstices: "During these rituals a Human Infant is killed and sacrificed to Satan, the Satanist drink the blood of the Infant Human they sacrifice..."  It's a mindblower however, when Webb further reports on attempted kidnapping of a two year old a few dayss ahead of the summer solstice in Oklahoma. The infant may have been targeted for sacrifice? The kindapper mentions "Illuminati" and "sacrifice" while in a standoff with police, who died later at the scene from a single gunshot!  You may clink hyperlink for story on attempted Oklahoma kidnapping.