Illuminati, Nazis and the Illegal State of Israel 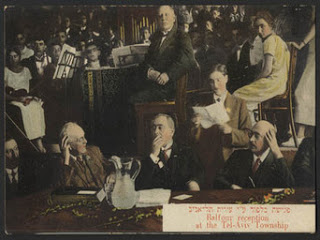 Dean Henderson writes insightful article for Veterans Today, “Illuminati, Nazis and the Illegal State of Israel,” detailing Rothschild influence and organizations they control behind the scenes. Henderson begins with the Balfour Declaration:

“If we wish to end the Israeli/Palestinian conflict, we need to know who created Israel and why. In 1917 British Foreign Secretary Arthur Balfour penned a letter to Zionist Second Lord Lionel Walter Rothschild in which he expressed support for a Jewish homeland on Palestinian-controlled lands in the Middle East. This Balfour Declaration justified the brutal seizure of Palestinian lands for the post-WWII establishment of Israel. Israel would serve, not as some high-minded “Jewish homeland”, but as lynchpin in Rothschild/Eight Families control over the world’s oil supply…The Israeli Mossad is less a national intelligence agency than it is a Rothschild/Rockefeller family security force.”

Henderson provides a detailed survey of Rothschild influence through their secretive organizations and societies with only briefest synopsis below:

“The Rothschilds exert political control through the secretive Business Roundtable, which they created in 1909 with the help of Lord Alfred Milner and Cecil Rhodes…The Roundtable takes its name from the legendary knight King Arthur, whose tale of the Holy Grail is synonymous with the Illuminati notion that the Eight Families possess Sangreal or holy blood- a justification for their lording over the people and resources of the planet…Children of the Roundtable elite are members of a Dionysian cult known as Children of the Sun. Initiates include Aldous Huxley, T. S. Eliot, D. H. Lawrence and H. G. Wells. Wells headed British intelligence during WWI. His books speak of a “one-world brain” and ‘a police of the mind’…”

The article supplies the cultural backdrop of fascism and Hitler.  Henderson maintains, “[Madame] Blavatsky’s Theosophical Society and [Edward] Bulwer-Lytton’s Rosicrucians joined forces to form the Thule Society, out of which the Nazis emerged.”

“The key to this historic puzzle is to understand that the Rothschild/Rockefeller sangreal international bankers supported both the rise of the Nazis and the creation of Israel. None of this has anything to do with religion. It has everything to do with oil, arms, drugs, money and power…Israel is not a “Jewish homeland”. It is an oil monopoly lynchpin,” concludes Henderson. Your rose-colored glasses are removed by Henderson upon finishing article, bottom line is ignoble struggle motivated by greed for money and power! Henderson article will also instantly increase your occult quotient!