Obamessiah Gets Four More Years of Fronting For the Empire 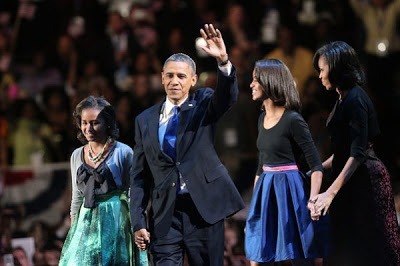 from nytimes.com: Barack Hussein Obama was re-elected president of the United States on Tuesday, overcoming powerful economic headwinds, a lock-step resistance to his agenda by Republicans in Congress and an unprecedented torrent of advertising as a divided nation voted to give him more time. In defeating Mitt Romney, the president carried Colorado, Iowa, Ohio, New Hampshire, Virginia and Wisconsin, a near sweep of the battleground states, and was holding a narrow advantage in Florida. The path to victory for Mr. Romney narrowed as the night wore along, with Mr. Obama winning at least 303 electoral votes.