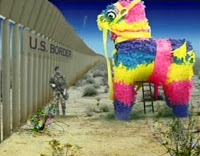 from raw story: President Bush suffered a major defeat Thursday as the immigration reform bill was defeated in the Senate. Although there had been strong conservative opposition to the bill, the president had been pushing for it hard the last few weeks.

"The Senate drove a stake Thursday through President Bush's plan to legalize millions of unlawful immigrants, likely postponing major action on immigration until after the 2008 elections," the Associated Press reports...

Bush, seeking to salvage the biggest domestic initiative of his final two years in office, called senators earlier in the morning seeking help.

However, supporters needed 60 votes in the 100-member Senate to keep the bill alive. Aligned against it were conservatives who derided the legislation as a grant of amnesty for illegal behavior and some Democrats who said it would leave a new group of temporary workers vulnerable to exploitation.

Supporters pointed to the bill's tougher border security and workplace enforcement measures, along with an immediate infusion of $4.4 billion to pay for them, as reasons to keep the bill alive for a final vote Friday.

The carefully crafted compromise was left for dead after a similar vote three weeks ago but was revived by Bush and Senate Democratic Leader Harry Reid, who gave opponents more chances to change it.