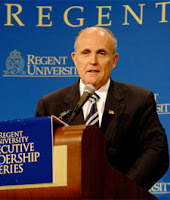 from alternet: During a speech Monday at Pat Robertson’s Regent University, former New York City mayor Rudy Giuliani indirectly blamed President Clinton for the Sept. 11 terrorist attacks. Echoing arguments offered frequently by Bush administration officials, Giuliani claimed that Clinton treated the 1993 World Trade Center bombing “as a criminal act instead of a terrorist attack,” which “emboldened other strikes” on the Khobar Towers in Saudi Arabia, Kenya, and Tanzania, and later on the USS Cole. “The United States government, then President Clinton, did not respond,” Giuliani said. “Bin Laden declared war on us. We didn’t hear it.“

The claim that Clinton “did not respond” to global terrorism during his administration is demonstrably and flagrantly false. (Giuliani himself knows this. Just last year, before he became a presidential candidate, he said, “The idea of trying to cast blame on Clinton [for the 9/11 attacks] is just wrong for many, many reasons, not the least of which is I don’t think he deserves it.”) Giuliani’s fundamentally misguided approach to counterterrorism is evidenced not only by his dishonest smears of President Clinton, but by his embrace of the same national security strategy as President Bush, under whom global terrorism is rising, Osama bin Laden is resurgent, the Middle East is deeper in violent unrest, and the U.S. military is in the midst of a readiness crisis.