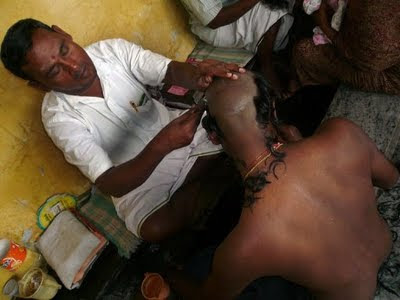 from afp: Strong religious belief and spirituality coupled with sky-rocketing demand from fashion-conscious Western women has made India the world-leader in the hair extension trade. The South Asian country has long been the world's biggest exporter of human hair and companies involved in the sector estimate that the business is now worth up to 8.5 billion rupees (nearly $200 million) a year. Hair is offered as a sacrifice to the hundreds of thousands of gods in the Hindu pantheon for reasons as diverse as wanting to ward off ill-health and misfortune or to bring luck and fortune. The practice is common in southern India, especially at temples in Tamil Nadu state where people from all over the country come to be shaved. But those in the hair trade that feeds off the ritual fear for the future, as modern India changes on the back of its recent economic boom, opening up the vast country to more secular, consumerist pursuits and outside influences. "There has been a change or trend in the reduction of the younger generation going to the temple and tonsuring their hair," said George Cherian, chief executive of Raj Hair International in the state capital Chennai. "They might cut their hair length half-way through but not necessarily fully shave their hair," he told AFP TV. For now though, business remains brisk.