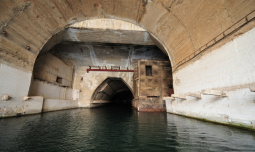 Richard Sauder, author of "Hidden in Plain Sight: Beyond the X-Files," provides another excerpt in article at The Intel Hub, "Underground Base Series Part 3." The anecdotal testimony of those who venture into unmarked areas, supply riveting vicarious adventure. Sauder provides one NSA employee account while stationed at NSA headquarters in Fort Meade, MD:

"I noticed a door next to the stairs by the east entrance where I came in at. There were no markings on it so I felt I could enter and not get in trouble. I opened the door and it was a stairwell leading down. I went over to the edge and looked down between the railings. I didn’t count the number of floors down, but I had the feeling it was about 15-20 floors. It was a long way to the bottom."

The reader is reminded this particular account dates from the late seventies!  "It would not surprise me if the complex beneath the NSA has grown even
larger, deeper and more elaborate in the intervening years," adds Sauder. Another interesting anecdote concerns the Naval Weapons Air Station at China Lake, CA, comes from a serviceman the author spoke with after a talk a couple of years ago:

He looked at me soberly and said very quietly, 'It goes one mile deep.'

I then asked him what the underground base contains. He replied, “Weapons.”

I responded, “What sort of weaponry?”

And he answered without pausing, 'Weapons more powerful than nuclear weapons.'"

Sauder seems to get sources to reveal something, then, they realize they've said too much and close the conversation. There's more in this installment: 2,000 mph mag-lev trains, bases under White Sands Missile Range in New Mexico, the national forests in California, under the sea floor in the Gulf of Mexico and inside a hollowed out Norwegian mountain.! The present writer suspects this is reason little concern expressed about radiation and pollution on the surface! The elite will seek refuge in their crypts below ground!