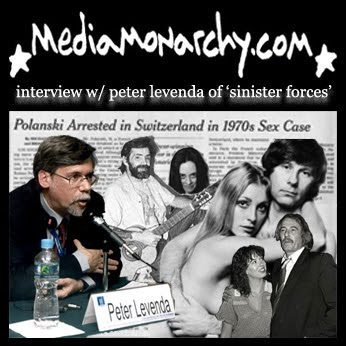 for the last couple of years, the three volume set of ‘sinister forces: a grimoire of american political witchcraft‘ has always been within arm’s reach. i’ve learned that whenever something in the news has reverberations back through the history/mystery of 20th century america, i can just jump to the indices & start to see some of the dots connect…

during the last weekend of september ’09, there was a strange confluence of news stories concerning the death of a manson family murderer, the revelations about disturbing sexcrimes in the occult california music scene & then the seemingly sudden arrest of roman polanski for his own infamous sexcrime.

now the polanski polemic, as i’ve called it, has become perfect fodder for the culture wars: it’s middle america vs hollywood. and while the average person may know the water cooler talking points, most of these discussions are long on moralizing & short on the shadowy substance… those “names to conjure with”, the “dates that have resonance” & the things “that scream out for an explanation where none can be provided.”

one of the most incredible examples: on june 5, 1968, roman polanski & sharon tate attended a dinner party at director john frankenheimer’s house where the guest of honor would have his last supper. that guest was robert francis kennedy & he was driven to the ambassador hotel later that night by the director of ‘the manchurian candidate‘… and, did you know that polanski had john phillips, of the mamas & the papas, investigated for his possible involvement in the murder of sharon tate? … add to this mix squeaky fromme, scientology, robert evans, west virginia, aleister crowley, disneyland, and of course, the specter that haunts this american house: charles manson.

when i began to see these red flags, i immediately reached out to our guest & author of the amazing ‘sinister forces’: peter levenda. he has written numerous other books on our hidden history, like his recent ‘secret temple: masons, mysteries & the founding of america‘. levenda is an authority on these subjects & has also been featured in numerous documentaries concerning the ‘unholy alliance‘ of nazis, the occult & US.

this latest special interview episode from media monarchy – the ninth one, appropriately enough – is a quick, yet fascinating look behind the media mask… behind the face that they present & a glimpse into what it really represents… all this & so much more – just in time for crowley’s birthday, the bombing of the moon & halloween.

One response to “interview w/ peter levenda of ‘sinister forces’”