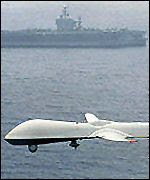 iran shoots down US spy drone

from xinhua: Iranian troops have shot down a U.S. pilotless spy plane recently, an Iranian lawmaker announced on Tuesday as the Islamic Republic was facing increasing military pressure from its arch rival - the United States.

The aircraft was brought down when it was trying to cross the borders "during the last few days," Seyed Nezam Mola Hoveizeh, a member of the parliament, was quoted by the local Fars News Agency as saying.

The lawmaker gave no exact date of the shooting-down or any other details about the incident, but he said that "the United States sent such spy drones to the region every now and then."