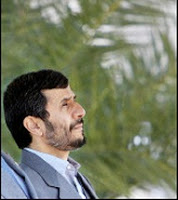 from raw story: Iranian President Mahmoud Ahmadinejad announced in a press conference today that he would grant an amnesty to and release the 15 British marines and sailors who were detained while patrolling the Shatt-al-Arab waterway, according to a breaking report on CNN.

A translation of Ahmadinejad's remarks showed him calling on British authorities to avoid prosecuting the sailors and marines once they had been freed for speaking in Iranian broadcasts about the circumstances of their detention.

An unofficial transcript of Ahamdinejad's statement acquired by RAW STORY stated the following:

"I declare that the people of Iran and the Government of Iran in full power and given their legal rights to place on trial the military people, to give amnesty and pardon to these 15 people. And I announce their freeing and their return to the people of Britain. I request the government of Mr. Blair not to question these people or to place them on trial for speaking the truth and I request Mr. Blair, rather than to increase the international controversy or call for the occupation of other lands, to take them toward peace, truthfulness and justice to serve the people of England."

According to an AP report, Ahmadinejad criticized the British for deploying a woman in its Navy.

"He criticized Britain for deploying Leading Seaman Faye Turney, one of the 15 detainees, in the Gulf, pointing out that she is a woman with a child," they noted.

CNN's Christiane Amanpour stated they will be set free at the end of the press conference in Iran.

The announcement came during a press conference in which Iran's president said he would give medals who took the British service members into custody.