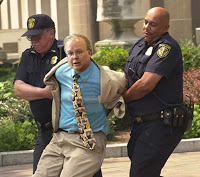 from nbc4: White House Advisor Karl Rove was the target of a protest on the American University campus Tuesday night, NBC 4 reported.

Rove was on the campus to talk to the College Republicans, but when he got outside more than a dozen students began throwing things at him and at his car, an American University spokesperson said.

The students then got on the ground and laid down in front of his car as a protest.

The students said security officials picked them up and carried them away so Rove could leave.

Police said they have dealt with a lot of protests on campus and this one was handled peacefully.

No one was arrested.

UPDATE...
from live leak: White House aide Karl Rove came face to face with angry protesters after speaking to the Young Republican Club at American University Tuesday night, with about 20 students lying down in front of his car.

Student Josh Goodman told The Washington Post other students kicked Rove's car, "and tried to stop it as best they could."

Goodman, an AU junior, said he and others wanted to make a "citizens arrest" of the presidential adviser.

This is exclusive eyewitness video of the incident.