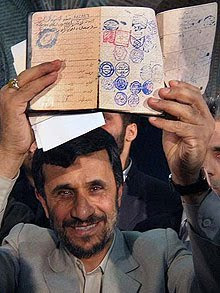 from raw story: In a stunning report on Saturday, a British newspaper claimed to have uncovered proof that Iranian President Mahmoud Ahmadinejad - notorious among the international community for denying the holocaust - was actually born a Jew.

According to The Telegraph, a high resolution photograph of Ahmadinejad holding up his Iranian identity card, taken just before the 2008 election, reveals that his family changed its name shortly after he was born, renouncing their Jewish faith and adopting Islam.

"A close-up of the document reveals he was previously known as Sabourjian – a Jewish name meaning cloth weaver," the UK paper reported.

"The name is even on the list of reserved names for Iranian Jews compiled by Iran's Ministry of the Interior," noted Israeli publication YNet News.

At the annual Quds Day rally in Tehran last month, the Iranian president reiterated his denial of the holocaust and blasted the Israeli government.