remember those wars you used to be against? cindy sheehan does 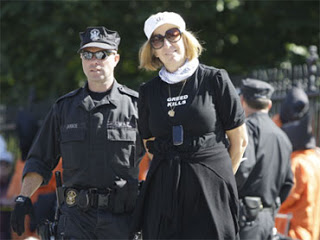 from cbsnews: Cindy Sheehan, dressed all in black with the words “greed kills” printed on her chest, was arrested by United States Park Police today after chaining herself to a White House fence as part of a protest against the wars in Afghanistan and Iraq.

According to organizers, 61 people in total were arrested at the protest, which was also in service of efforts to “Close Guantanamo and Bagram, Surge Spending on Housing and Jobs.”

While some protesters chained themselves to the White House fence, others lay on the ground, pretending to be dead, CNN reports. Organizers requested a meeting with President Obama to discuss their beliefs.

update: cindy sheehan moving to the district of criminals
from abcnews: She’s back and this time, she’s here to stay. Cindy Sheehan says she is moving to Washington. The anti-war activist was outside the White House for the second day in a row, with a bullhorn and a handful of protestors, shouting against the wars in Iraq and Afghanistan, Guantanamo and calling for “health care not warfare.”

Sheehan became a prominent voice against the Iraq war after her son Special Casey Sheehan was killed in Iraq 2004, and spent years hounding George W. Bush. Now, she’s turned her attention to President Barack Obama, recently following him on his family vacation to Martha’s Vineyard, and now planning to move to D.C. sometime this winter. Sheehan says she sees no difference between the foreign policy of the last president and this one.

update: thanks to redicecreations.com for helping spread this story

One response to “remember those wars you used to be against? cindy sheehan does”