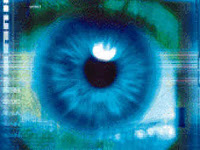 from houston chronicle: Technology developed to keep track of prisoners by scanning their irises became available Thursday to identify missing children... part of an effort to image the irises of 5 million children into a nationwide database over the next few years, said Robert Melley, vice president and CEO of Biometric Intelligence & Identification.

but this will only be used for 'the children'... yeah, and the military commissions act isn't for american citizens & the detentions centers being built are for an 'immigration emergency.'