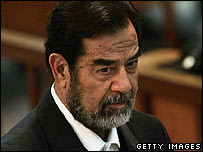 from bbc: Former Iraqi President Saddam Hussein has been executed by hanging at an unspecified location outside Baghdad's Green Zone for crimes against humanity...

from wayne madsen: Iraq's former dictator managed to avoid one of the world's most high-tech assassination efforts during the Iraq War campaign only to be allegedly discovered by U.S. forces hiding in a hole in the ground near Tikrit. There is little doubt that the trial of Saddam Hussein by a U.S. puppet government in the Green Zone of Baghdad has been a charade and a miscarriage of justice.

Saddam's death sentence decided by an Iraqi government-appointed and U.S.-approved judge on Dec. 26 was never in doubt, considering the knowledge the former Iraqi leader possesses of past crimes of the Bush family and their coterie of friends and partners in providing Iraq with much of the biological and chemical weaponry used against the Kurds, Shi'as, and Iranians.

Saddam Hussein's willingness to provide the Western media with documents and other evidence of the connivance of George H. W. Bush, Donald Rumsfeld, Frank Carlucci, and other Reagan-Bush administration principals was made apparent to this editor in the months preceding the March 2003 American attack on Iraq.

A senior Iraqi official contacted a British colleague of this editor and passed on a personal offer from Saddam Hussein to provide an "enterprising" Western journalist with the proof of America's sanctioning of Saddam's use of U.S.-supplied chem-bio weapons during the Iran-Iraq War, including Iraq's attack on the Kurdish village of Halabja. Also included in Saddam's "package" would be top secret information regarding his role as a longtime asset for the CIA, dating from his student days in Cairo.

The essence of the offer passed to this editor via the British interlocutor was that Saddam, aware that George W. Bush was going to attack Iraq, ordered his intelligence service to gather up all incriminating evidence that would show the world that Iraq's past "weapons of mass destruction" were provided by the Reagan and Bush I administrations.

This proof undoubtedly included tape recorded conversations between Saddam and his advisers and Ronald Reagan's personal envoy to Iraq, Rumsfeld. Saddam hoped that the exposure of the Reagan-Bush administrations would embarrass Washington and derail its attack plans.

The offer from Baghdad was straightforward -- arrive in Baghdad overland from Jordan and the proof would be handed over. There was one slight hitch. Having such incriminating evidence -- documents and proof that the Reagan administration and that of George W. Bush's father aided and abetted in Saddam's military's use of chem-bio weaponry against Iranians and his own people -- would have likely made any "enterprising" Western journalist an inviting target for a number of bad actors the moment that journalist crossed into Jordanian territory from Iraq.

Ironically, Saddam Hussein was more willing to provide the media with classified and sensitive information to expose the machinations of the United States than anyone in the George W. Bush administration or that of his father.

It is very clear why the Bush administration wants Saddam dead and it has nothing to do with Saddam's alleged "crimes against humanity."