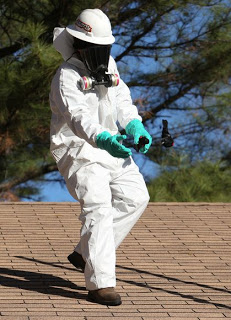 from paul joseph watson: A mass die off of birds and fish in Arkansas which prompted a response by U.S. Environmental Services has residents asking questions about the cause – could secret government testing be responsible for the carnage? Around 2,000 red-winged blackbirds, as well as ducks, fell to their deaths over a 1-mile area of Beebe, Arkansas on Friday night. U.S. Environmental Services workers wore hazmat suits and gas masks as they picked up the dead birds on Sunday... In a related story, 100,000 fish were found dead in Northwest Arkansas. “They were found along a 20-mile stretch between the Ozark Dam and Highway 109 Bridge in Franklin County,” reports Today’s THV 11... The U.S. government has been repeatedly caught engaging in illegal bio-weapons tests over American skies that have maimed and killed not just animals, but humans. The history of US government biological testing includes deliberately infecting Americans with syphilis, malaria and other bacteriological agents... Given the history of governments across the world performing unwitting experiments on their populations, the number one suspect in such cases should always be government. Just a few months ago is came to light that in the late 1940′s, “American public health doctors deliberately infected nearly 700 Guatemalans - prison inmates, mental patients and soldiers - with venereal diseases.”