israel on alert: secret nuclear plant in the crosshairs 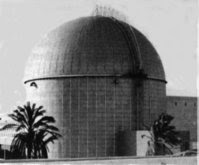 from israel international news: The missile defense system at Israel’s Dimona nuclear reactor is on high alert due to concerns that Syria might target it in an attack. Israeli officials say the Dimona facility is “on the top of [Syria’s] list.” According to a report published in the British Sunday Times, the Dimona nuclear reactor was placed on red alert 30 times last week.Israel’s Air Force tracks all aircraft in neighboring Arab states, said the unnamed Israeli sources quoted in the British Sunday Times, and is ready to launch a defensive strike within seconds if an unidentified or enemy aircraft attempts to approach Dimona.

It was later reported that Israel had attacked a nuclear facility that showed signs of having been built by North Korean scientists, and that an unnamed U.S. official had said “Israelis obtained many detailed pictures of the facility from the ground.”