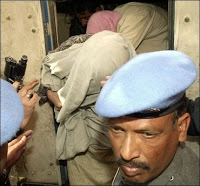 from afp: A Pakistani businessman suspected of playing a role in the brutal 2002 killing of American journalist Daniel Pearl died earlier this year, shortly after being interrogated by US and Pakistani intelligence, The Wall Street Journal reported Monday.

Pearl, a Karachi-based correspondent for the Journal, was kidnapped on January 23, 2002, and killed execution-style shortly after.

The newspaper said Karachi businessman Saud Memon became a key suspect in the case because he owned a nursery where Pearl had been held captive.

Citing an unnamed senior US law enforcement official, the report said Memon was interrogated by both US and Pakistani intelligence services.

He was “in a lot of the rooms where important things were being discussed,” the paper quotes the US official as saying. “He knew senior Al-Qaeda people, and was moving equipment and supplies.”

But Memon’s family members and human rights groups said that in April, the businessman was left in front of his Karachi home badly injured and emaciated, weighing just 80 pounds (36 kilograms), according to the report.

About a month later, he died from what was described as complications from meningitis and tuberculosis, the Journal said.

Pakistani human rights groups have accused the local intelligence service of torturing Memon, according to the paper.

But the report mentions an unnamed Pakistani police official saying Memon was already in poor condition when the United States gave him back to the Pakistanis.