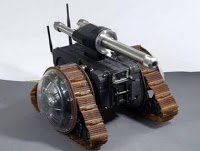 from reuters: An Israeli defense firm on Thursday unveiled a portable robot billed as being capable of entering most combat zones alone and engaging enemies with an onboard armory that includes a machine-pistol and grenades.

The VIPeR, roughly the size of a small television, was invented as part of Israel's efforts to develop weaponry that could reduce the risks to its forces from hand-to-hand fighting against Palestinian or Lebanese Hezbollah guerrillas.

As well as bomb-sniffing and bomb disposal equipment, the VIPeR can carry an Uzi machine-pistol or plant a grenade. The weapons would be aimed using an onboard video camera.

According to Elbit, which has close links with the Defense Ministry, Israel plans to deploy the VIPeR among its infantry units after field tests. The robot could also be of interest to foreign police units or U.S. forces in Iraq and Afghanistan.