from haaretz: The testimonies of Gaza Strip residents are revealing new details about the Israel Defense Forces’ mode of operation there. In the past two days, Beit Lahia residents forced from their homes said soldiers were posing as members of Hamas’ armed wing while advancing on the ground. The daily pauses in bombing allow Gazans to meet with the displaced - most of whom are housed in an UNRWA school - and hear their stories. Gaza resident S. told Haaretz he heard several people say they saw armed men wearing the uniforms and symbols of the Iz al-Din al-Qassam Brigades, who “called out to each other in Arabic, as if they had caught a collaborator, and then, with the element of surprise, went into the houses.” A Gaza radio station warned that troops posing as locals were driving a vehicle normally used by paramedics. Residents said the radio broadcaster listed the vehicle’s license plate number and color. 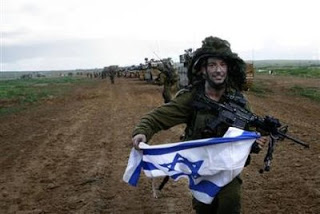 from paul joseph watson: Israel has announced that it is setting up a network of bloggers to combat websites deemed “problematic” by the Zionist state, presumably to propagandize about the necessity of killing babies and infants in the name of self-defense. Israel’s global reputation for being the new Nazis was already firmly established, but the ceaseless and indiscriminate bombing of Gaza, labeled a war crime by international observers, has hardened opinion against the country and this has manifested itself nowhere more than the world wide web. Israel’s response will be to flood the Internet with PR agents who will attempt to create a phony consensus that the Zionist state’s barbarian actions are justifiable.