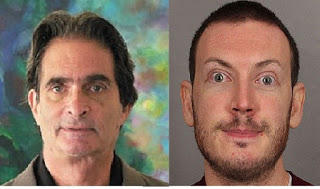 Jon Rappoport (picture, left) writes with unusual insight, “James Holmes, and how the CIA hid their MKULTRA mind-control program,” about precarious situation of the alleged killer and history delivering us to point last year, where Holmes waited in his vehicle behind a Century 16 Theater in Aurora, Co.- like a good mind-control subject?  Could Holmes be anything other than mind-controlled?  What happened to good old days when violent criminals wouldn’t be taken alive? Isn’t there a glaring incongruity, when a perp with the gall to shoot up a movie house, all by himself, retires to his car to await arrest?    Holmes (picture, right) has not faired well in custody and Rappoport keenly observes, “Holmes will be given ‘truth drugs’ to ‘refresh his memory’ about his state of mind at the time of the killings. If that sounds absurd, it is. I wrote a piece the other day detailing how such drugs are often given to produce extreme terror in patients. In other words, the drugs don’t elicit the truth. They’re used as threats to force the patient/suspect to confess to whatever his torturers want him to confess to.” It’s apparent Holmes has been heavily drugged!  It’s hard to say, what else Holmes has been subjected?   Perhaps, more interesting, Rappoport provides masterful history of sordid mind control tale and how it dovetails with modern psychiatry.  You can drop below fold to gain better insight into why Holmes looks like he does in above picture!


Rappoport shares how John Marks, author of seminal book, “In Search of the Manchurian Candidate (pdf),” made most of financial statements CIA provided him in response to a Freedom of Information Act request.  CIA thought Marks couldn’t do much with boring financial records, notes Rappoport.  Marks also related beyond early success revealing existence of  MK-ULTRA, the door slammed tightly shut on any further disclosures:

“In case there is any doubt about it, the idea of relying on the CIA to admit what it has done in the mind-control area, what it is doing, and what it will do should be put to bed by John Mark’s statements. The CIA always has been, and will continue to be, a rogue agency beyond the reach of the law.”

Other important early books on mind control are “Operation Mind Control (pdf)” by Walter Bowart, covered in a prior post here.  A second groundbreaking book noted by Marks, “The Mind Manipulators (excerpt),” by Alan Scheflin and Edward Opton Jr.

Rappoport points out what may go overlooked:  “People need to understand how the history of mind control and psychiatry are interwoven, and how the madmen and murderers within these ‘professions’ are content to use torture ‘in the name of science.’”  You may also read entire 1995 article by Rappoport, “Mind Control Experiments on Children.”