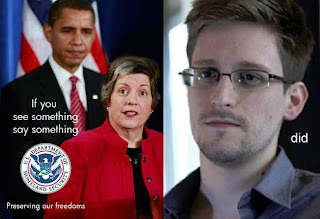 from Politicker.com: Homeland Security Secretary Janet Napolitano weighed in on the NSA
intelligence leaks on Friday, telling NY1 that fears over government
surveillance were overblown.


“I think people have gotten the idea that there’s an Orwellian state
out there that somehow we’re operating in. That’s far from the case,”
she told Errol Louis during an appearance on Road to City Hall.


Despite civil liberties advocates’ fears
that monitoring efforts have gone too far, “there are lots of
protections built into the system,” Ms. Napolitano said, pointing to a
privacy office embedded in her own department that is “constantly
reviewing our policies and procedures.” She further stressed the court
review system.


“No one should believe that we are simply going willy-nilly and using any kind of data that we can gather,” she said.


Still, she acknowledged the federal government hasn’t done the best
job of keeping the public informed about how it is treating the enormous
amounts of personal information that could potentially be used in
intelligence gathering.

“I think we need to do a better job of explaining to the American
people exactly what is kept, what are the real restrictions on how—I’m
just talking now for DHS, Department of Homeland Security–how we use it,
how long we can keep it, how we share it, all those thing,” she
explained.

Ms. Napolitano added that striking the right balance between security and civil liberties is always a challenge.

“We’re constantly struggling,” she said. “It’s not easy–because
technology has increased so much–these balances between security and
privacy and other values.”