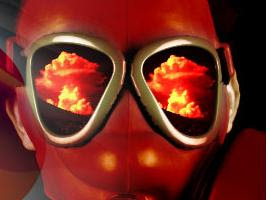 Environmental writer Yoichi Shimatsu provides keen insight on Japan's disaster in article, "Is Japan's Elite Hiding a Weapons Program Inside Nuclear Plants?" A casual observer of the calamity cannot help but compare Japan's inept response to US government's similar ineffective efforts in 2005 Hurricane Katrina disaster? Shimatsu comments, "Inexplicable delays and half-baked explanations from Tokyo Electric Power Company (TEPCO) and the Ministry of Economy, Trade and Industry (METI) seem to be driven by some unspoken factor." There is an unsettling lack of response just as in the Hurrican Katrina disaster? Why? "The most logical explanation: The nuclear industry and government agencies are scrambling to prevent the discovery of atomic-bomb research facilities hidden inside Japan's civilian nuclear power plants," concludes Shimatsu.

Perhaps, most damning are the following two revelations, "[unit 4] omission from the list of electricity-generating operations raises the question of whether Unit 4 was being used to enrich uranium, the first step of the process leading to extraction of weapons-grade fissionable material."

The second is equally explosive, "...bloom of irradiated seawater across the Pacific comprises another piece of the puzzle, because its underground source is untraceable (or, perhaps, unmentionable). The flooded labyrinth of pipes, where the bodies of two missing nuclear workers—never before disclosed to the press— were found, could well contain the answer to the mystery: a lab that none dare name." Wow! A tip of the hat goes to Shimatsu for his incisive inquiry!

You can listen to Yoichi Shimatsu's most recent report here on the Japan disaster. Article is an education and interview makes a nice companion. It's great stuff!