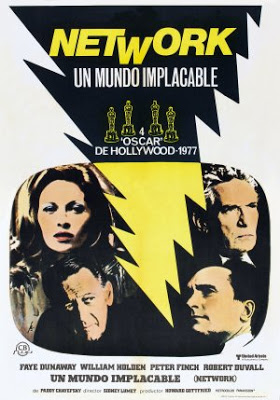 from cbsnews: Acclaimed filmmaker Sidney Lumet, who died today at the age of 86, left a legacy of classic films, many of which dealt with crime and justice - "12 Angry Men," "The Anderson Tapes," "Serpico," "Dog Day Afternoon," "Murder on the Orient Express," "Night Falls on Manhattan," to name just a few.

But as great as they are, they pale next to "Network," the 1976 satire of television that won four Oscars. Written by Paddy Cheyefsky (who, like Lumet, got his start in live television in the 1950s), the film tells of a broadcast network's news division taken over by an entertainment executive (Faye Dunaway) who had unusual ideas about journalism.

Peter Finch earned an Oscar for his performance as Howard Beale, the news anchor knocked off the air for mental instability, only to be returned in front of the cameras as a ratings driver in the guise of a "mad prophet of the airwaves." His message: don't believe what you see and hear on TV. The audience eats it up.

In the clip below, Beale - who has been wandering the streets in the rain - arrives at the studio to deliver not the news but a challenge to his audience, and to society in general, to reject feeling powerless against the political and media forces of the world.