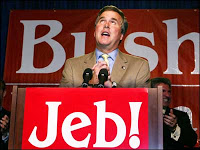 from reuters: The shadow of President Bush seemed to loom large over his younger brother on Wednesday, as the outgoing Florida governor ruled out any plans to return to elected office.

“No tengo futuro (I have no future),” Jeb Bush told Spanish-language reporters in Miami, when asked about any possible political ambitions after he steps down next month.

The popular, two-term governor has often been touted as a savvy politician with a good chance of following both his brother and father, George H.W. Bush, into the White House.

But the unpopularity and dismal job-approval ratings of his brother may have scuttled any plans Jeb Bush may have had for a future in politics after running one of America’s most crucial swing states for the past eight years.

Bush did not elaborate on his terse “no future” comment. But he has said repeatedly over the past year that he would not run for president in 2008 and has never seemed comfortable with talk about Bush III or the Bush presidential dynasty.

“Jeb would have made an outstanding presidential candidate,” said Kansas Sen. Sam Brownback, who joined Bush at a luncheon on Wednesday hosted by a Cuban American political action committee.

Brownback, a Republican who launched an exploratory committee three weeks ago to consider his own bid for the presidency, added that he was “a Jeb Bush-type conservative.”

In a backhanded slap at President Bush, Brownback cited “a heritage issue” as one factor currently weighing against a Jeb Bush presidency.

“People may be wanting to see a different name,” he said.