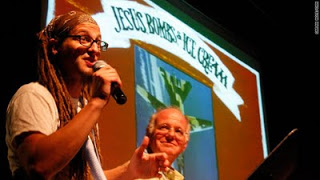 from beliefblog: An unlikely pairing took to the stage Saturday in front of a sold out audience at World Café Live to promote peace and ice cream. Philadelphia-based Christian author and activist Shane Claiborne partnered with Ben Cohen, co-founder of Ben and Jerry’s Ice Cream, to raise public awareness about federal military spending. The evening started off on a somber note with Cohen pouring 10,000 BB gun pellets into a metal container to illustrate the power of the United States’ nuclear arsenal in front of a stunned audience. “It’s that kind of overkill mentality that drives an out-of-control Pentagon budget,” he said.