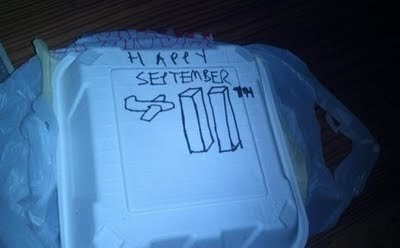 from ktrk: "Happy September 11th" -- three words written on a takeout box from a Houston restaurant, and they are causing a lot of emotional reactions. Since then we've spoken with the man who found that written on his food container. There are some events in life which cannot be mocked, and that's what this story is about -- one that was started in a Garden Oaks restaurant on Sunday but came to an amicable end on Monday.

The Petrol Station is known for its burgers and craft beers and flat screens for football. That's why Tarek Ghalayani went there Sunday night with a friend. "Just hanging out, I'd just gotten back in town, so I said let's go catch up for a few minutes," Ghalayani said. He ordered a burger to go at the bar. When his order was ready... "A couple of the guys behind the counter looked at it, and kinda laughing," he said.

When he opened the bag at the restaurant, he saw what had been written on the box: "Happy September 11th" with a drawing of the towers and a plane. He confronted the bartender in question but no apology. Galayini is Muslim, but the offense he takes is as an American at seeing 9-11 trivialized. "It's a sad day in this country's history, where we lost 3,000 innocent lives and I don't ever think there's ever going to be a time when that's OK," he said.