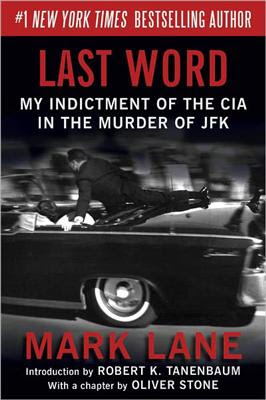 'lost' jfk assassination tapes on sale
from ap: A long-lost version of the Air Force One recordings made in the immediate aftermath of President John F. Kennedy's assassination, with more than 30 minutes of additional material not in the official version in the government's archives, has been found and is for sale.

from cisionwire: New York Times number one bestselling author and JFK historian Mark Lane tried the only U.S. court case in which jurors concluded that the CIA plotted the murder of President Kennedy, but there were always missing pieces: How did the CIA control Dallas police and Secret Service agents on the ground in Dealey Plaza? How did federal authorities prevent the Warren Commission and the House Select Committee on Assassinations from discovering the truth about the complicity of the CIA? Now, Lane tells all in his explosive new book – Last Word: My Indictment of the CIA in the Murder of JFK – with exclusive new interviews, sworn statements and meticulous new research (including interviews with Oliver Stone, Dallas Police deputy sheriffs, Robert K. Tanenbaum, and Secret Service agent Abraham Bolden) Lane finds out first hand exactly what went on the day JFK was assassinated.

'the umbrella man'
from errol morris: For years, I’ve wanted to make a movie about the John F. Kennedy assassination. Not because I thought I could prove that it was a conspiracy, or that I could prove it was a lone gunman, but because I believe that by looking at the assassination, we can learn a lot about the nature of investigation and evidence. Why, after 48 years, are people still quarreling and quibbling about this case? What is it about this case that has led not to a solution, but to the endless proliferation of possible solutions? Years ago, Josiah Thompson, known as Tink, a young, Yale-educated Kierkegaard scholar, quit his day job as a professor of philosophy at Haverford College to write the definitive book on the Zapruder film — “Six Seconds in Dallas.” Tink became a private detective, and came to work with many of the same private investigators I had also worked with in the 1980s. We had so much in common — philosophy, P.I. work and an obsessive interest in the complexities of reality. But we had never met. Last year, I finally got to meet and interview Tink Thompson. I hope his interview can become the first part of an extended series on the Kennedy assassination. This film is but a small segment of my six-hour interview with Tink.