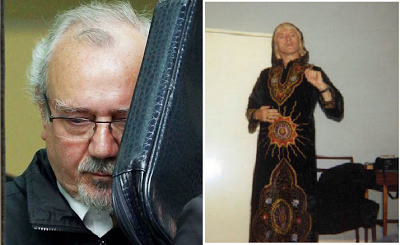 The body of David Smith (picture, left) was discovered in his South London home recently on very day slated to appear in court, a London paper reports. There are fears he took his own life, according to The Telegraph.  Smith was first person charged in Operation Yewtree, an attempt by London authorities to further investigate multitude of allegations stemming from Jimmy Savile (picture, right) case. Savile alleged to have long history of child molestation, was also rumored to be a procurer of underage children for wealthy clients.  The timely death possibly underscores importance of covering up details of crimes committed.   Smith had 22 convictions for crimes against young boys, dating back to 1966!  London seems to treat crimes against children as little more than traffic tickets?  The huge pedo-scandal in the United Kindgom (UK) continues unabated, one aspect remains under-reported however, allowed to lurk in the shadows due to its particularly hideous and beastly nature.

A disinfo article from earlier this year, naively inquires, "...information is coming to light which suggests that, far from being a nightmarish fantasy, devil-worshipping ritual abuse could be a disturbing reality."  A woman identified as Paula in another article from earlier this year,"I was raped at 13 by Jimmy Savile in satanist ritual," confirms her abuse in a satanic ritual and its grim reality.  Paula relates details in article:

"Now aged 50, Paula still suffers horrific flashbacks and cannot sleep properly. She decided to come forward after we revealed last week how Savile raped two women ­during satanic ceremonies in the Seventies and Eighties...'I was brought in to a dark cellar and made to stand in front of three men in a ­circle, with the man in the middle sitting on a throne-like chair in a bright gown with a cigar in his mouth. A man stood on either side in blue cloaks and masks.  I was made to stand in front of this chair dressed in only a white gown with nothing underneath and to just stand there while this man looked over me blowing cigar smoke into my face making me feel very sick and terrified.  Around this slightly raised circle were men and women dressed in black cloaks wearing masks and various costumes.  I was then taken by the man smoking the cigar, who I recognised as Jimmy Savile, to an altar table where I was stripped of my gown and tied to the altar.  Savile then climbed on to the table and raped me. Others around him called out Satan’s name and laughed hysterically and were worked up into a frenzy.'

Paula said: 'To speak of it after all those years feels like a great weight has been lifted off me at long last. There are many people all around the world who know exactly what men like Savile are capable of and the time has come to bring these atrocities of sheer evil and depravation to light.'"

Hear, hear, Paula.  It's time for readers to move on to next level, accepting reality of satanic ritual abuse, especially, among wealthy elite.   Are we to accept vague statements from media,  "fears he took his own life," without more details?  Will there be more dying to keep quiet?