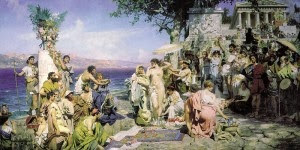 The Eleusinian Mysteries of Ancient Greece

from blog.prehistoricshamanism.com:
For nine days, from the 15th to the 23rd of the month of Boedromion (which probably corresponded to September), the Eleusinian Mysteries of ancient Greece took place. These were initiation ceremonies into the cult of Demeter and her daughter, Persephone, occurring in Eleusis in West Attica, about 18 km northwest from the centre of Athens.

The Eleusinian Mysteries centre on the abduction of the goddess Persephone by the dark lord of the underworld, Hades, who snatched her away from her mother Demeter. Rather than concentrating on the fate of Persephone, the Eleusinian Mysteries follow the anguish of Demeter as she searches for her lost child. Following a familiar theme, the myth has three cycles: death – the descent of Persephone to the underworld, incubation – the time Demeter spent in the underworld looking for her daughter, and rebirth – return from the underworld and reunion of mother and daughter. The Eleusinian Mysteries focussed especially on rebirth – the reunion – although the exact details of what went on are unknown since initiates swore an oath of secrecy, which meant nothing was ever recorded beyond a few peripheral details. Nevertheless, researchers believe the ceremonies were well-established as far back as Mycenaean and even into Minoan times. This was clearly an important theme for all ancient Greeks.

The culmination of the ceremony appears to have been entry into a great hall, or Telesterion, and, in the 5th century BC, Iktinos, the great architect of the Parthenon, rebuilt the Telesterion at Eleusis to be big enough to hold thousands of people. Relics of Demeter were held at its heart, emphasising death and rebirth but, exactly what they were, is not recorded.

The Homeric Hymn to Demeter may have formed part of the ritual. This retells the myth of her daughter’s abduction and how – because Persephone had tasted the food of the underworld – she must return to Hades for half the year, so eternally living the cycle of death and rebirth.
There is also mention of a sacrament in the Hymn, which is worth quoting in full:

Then Metaneira filled a cup with sweet wine and offered it to Demeter; but she refused it, for she said it was not lawful for her to drink red wine, but bade them mix meal and water with soft mint and give her to drink. And Metaneira mixed the draught and gave it to the goddess as she bade. So the great queen Deo received it to observe the sacrament.

Many scholars believe that drinking such a draught was an integral part of the Eleusinian Mysteries and was possibly the central rite carried out in the Telesterion. Some believe the meal or grain may have been barley infected with the ergot fungus, so providing an ecstatic state for those undertaking the sacrament. People would have experienced their own death and rebirth, possibly following Demeter as she descended into the underworld looking for her lost daughter.

The Telesterion was destroyed by the Persians after the battle of Thermopylae in 480 BC but was rebuilt by Pericles, hero of Athens, suggesting the mysteries still endured. Even when the rampaging Costoboci tribe razed the Telesterion in AD 170 – a period when Attica was under the rule of the Roman Empire – the Emperor Marcus Aurelius had it rebuilt, once again suggesting the mysteries endured.

It was not until AD 396 and the attack of Alaric the Visigoth that the Telesterion was destroyed for the last time, never to be rebuilt. By this date, Christianity had taken over much of Europe, replacing the old gods and their ceremonies.

The Eleusinian Mysteries are similar to other cults from the Near East centring on death and rebirth, and were open to both men and women. According to the Hymn to Demeter, King Celeus (the husband of Metaneira) was one of the first people to learn the secret rites and mysteries. Unusually, it seems that even slaves were admitted to the Telesterion. The only condition for all admitted – besides being able to speak Greek – is that the individual had no blood on their hands through murder. Presumably, this act distorted the progression of birth, death, and rebirth celebrated in the mysteries.
The original Eleusinian Mysteries were a closely guarded secret during the days of ancient Greece but many modern pagan groups incorporate reflection on death and rebirth as part of their Autumn Equinox celebrations. Participants are shown a sheaf of wheat or barley and told that herein lies the mystery of existence. A mystery that initiates have studied for three millennia or more.