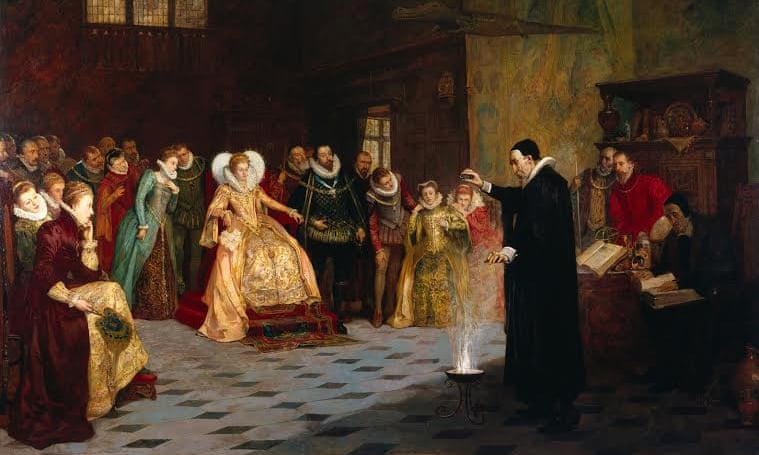 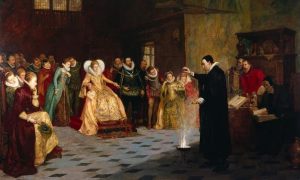 Oh, not John D. Rockefeller, that'd be too convenient.

In preparation for its exhibition at the Royal College of Physicians, an x-ray of a painting by Henry Gillard Glindoni has revealed a spooky detail that was painted over - before Photoshop was Photoshop! In the painting, John Dee, a man once known as “the Queen’s conjurer” performs an experiment for Queen Elizabeth I. The x-ray revealed that Dee was originally standing in a circle of skulls. 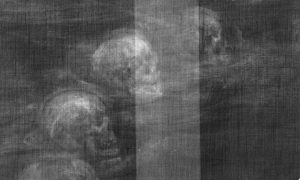 In The Guardian, Mark Brown writes:

Dee is probably best known for his mysticism and his belief that he could talk to angels, and the exhibition includes loans such as Dee’s crystal ball and an obsidian magical mirror.

For a time, he was "considered one of the most learned men in Europe," writes Jason Louv in his book, The Angelic Reformation: John Dee, Enochian Magick & the Occult Roots of Empire, excerpted at BoingBoing. As Louv details in his book, Dee translated Euclid's, Elements and so introduced the English-speaking world to the +, -, x and ÷ signs. So influential was Dee that Shakespeare created Prospero in The Tempest, based on him. The Bard had reason to be inspired by the mysterious figure: Dee also helped create the British intelligence service and signed his secret letters to Elizabeth with two circles, representing eyes, and the number seven, the alchemist's lucky number, writes Peter Gentle for The World of English. Centuries later, Ian Fleming would read about Dee's life and give his own creation, James Bond, the "007" code name.

For more information about John Dee, check out this brief biography on him from MysteriousBritain.co.uk.