John McAfee Is Hunkered Down In Portland Now 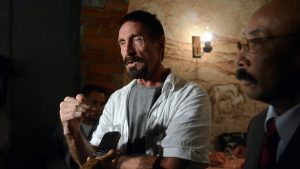 from Gizmodo.com: Of course it’s Portland. The weirdest story in tech in 2012 has resurfaced in the Northwest. McAfee’s going to be spending the next 18 months in the city, and we’re trying to figure out what, exactly his next move is.

McAfee’s been back in the US since December, when he arrived in Miami on a commercial jet.

That followed a several-week saga of McAfee being on the run from Belizean authorities under suspicion of murder. He sat for an interview with Willamette Week upon his arrival in Portland, and there are a few clips online already, with more to come.

Gizmodo’s Peter Ha is staying in Portland this week, just up the block from Mary’s, a strip club where McAfee was on the 9th for an interview with the Sunday London Times, and trying to get in touch with Mr. McAfee this week.