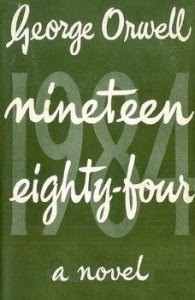 from wired: Sixty years ago today, Nineteen Eighty-Four is published. It’s official: In the face of the monolithic state, the little guy has no chance at all.

George Orwell’s dystopian novel, one to stand alongside Aldous Huxley’s Brave New World as a towering work of futuristic pessimism, posits a grim society where the government is all powerful and all knowing and the individual spirit has been effectively extinguished. Big Brother, a seemingly benevolent but terribly vengeful ruler who may or may not exist, is the personification of the state. To keep the masses docile and pliant, books are banned, surveillance is everywhere and all information is closely guarded by the state. (Huxley envisioned a different future, one which perhaps more closely mirrors our present: In Brave New World, there is no reason to ban a book, since people are too busy pursuing their hedonistic distractions to bother picking one up.)

Nineteen Eighty-Four is told through the eyes of Winston Smith, a minor civil servant in the Ministry of Truth whose job it is to rewrite history for the totalitarian state of Oceania. His spirit hasn’t been entirely quashed, though, and he chafes under the yoke, eventually joining a rebellion against the state. He is soon betrayed, arrested and tortured. In the end, Smith wins his freedom by accepting the assertion that 2 + 2 = 5.

The book yielded a bounty of new coinages: “Thought Police”, “doublethink,” the aforementioned “Big Brother” and the especially sinister “Newspeak” all entered the language through Nineteen Eighty-Four. Even the author’s pseudonym (his real name being Eric Arthur Blair) became a chilling adjective: “Orwellian” is applied to any characteristic display of totalitarian might.

Nineteen Eighty-Four is often described, mainly by conservatives, as an attack against socialism. Orwell, who called himself a socialist although contemporary scholarship suggests his political philosophy was ambiguous and fluid, disputed this. He made it clear on at least one occasion that his novel was aimed squarely at totalitarianism, which he considered a perversion of socialism. His 1944 novel, Animal Farm, was a pointed attack against the Soviet system, which Orwell believed had betrayed socialism’s true spirit.

In any case, Orwell didn’t live to see the long-range social impact of his work. He had been in poor health for years and died in January 1950, only 46.

flashbacks: orwell's house surrounded by cctv cameras &
the future has caught up with us