Junk food linked to #asthma and #eczema in children 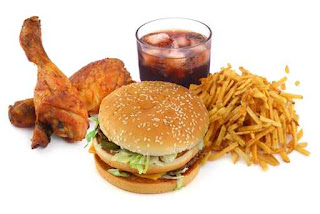 The high saturated fat levels in food such as burgers lower children's immune systems, it is believed.
A research project involving more than 50 countries found that teenagers who ate junk food three times a week or more were 39 per cent more likely to get severe asthma. Younger children were 27 per cent more at risk.
Both were also more prone to the eye condition rhinoconjunctivitis, according to