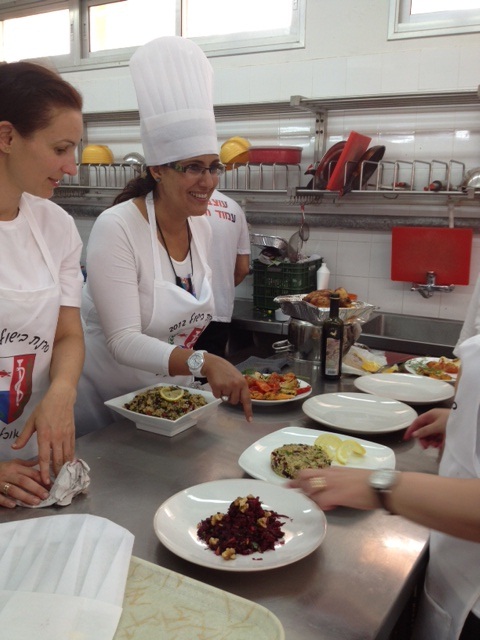 Just What The Doctor Ordered: Med Students Team With Chefs

from npr.org: For the past few weeks, the culinary arts students at University in Providence, R.I., have been working with some less-than-seasoned sous chefs.

One
of them, Clinton Piper, may look like a pro in his chef's whites, but
he's struggling to work a whisk through some batter. "I know nothing
about baking," he says.

Luckily, he's got other qualifications. Piper is a fourth-year medical student at , and he's here for a short rotation through a new designed to educate med students and chefs-in-training about nutrition.

"I think it's forward thinking to start to see, to view food as
medicine," he says. "That's not something that's really on our radar in
medical education. But with the burden of disease in the United States
being so heavily weighted with lifestyle disease, I think it's a very,
very logical next step."

So-called lifestyle diseases mainly
spring from bad habits, particularly bad eating habits. Think obesity or
diabetes. Piper says the goal of this partnership between New Orleans,
Louisiana-based Tulane and Johnson & Wales is to change the way
doctors think about food. As far as the program's creators know, it's
the first time a culinary school and a medical school have partnered
like this.

"We basically learn how to take care of patients
when things go wrong, which is sad," says Neha Solanki, a fourth-year
medical student at Tulane. "I think that we need to learn how to be able
to make nutritious meals and to discuss diet in an educated manner."

One of their assignments is to feed the Johnson & Wales track
team. The team will arrive breathless and sweaty after practice.
According to assistant professor , an instructor in culinary nutrition, the assignment is to create a "recovery meal."

"We're
going to try to take advantage of what's called an anabolic window, a
specific period of time after the workout where we can give them the
best gains," he says.

The first course will be a "recovery" bar
with whole grains, spices and marshmallows to deliver some quick
sugars. Then there's the frittata that Solanki is laboring away at,
stuffed with baby zucchini, red bliss potatoes, red bell peppers,
parmesan and feta cheese and spinach. It's a feast, says culinary
student Briana Colacone, designed to refuel with lean protein and carbs.
"It's going to be really good," she says.

Using med students
as sous chefs brings its own challenges — Colacone has to slow down to
show med student Neha Solanki how to chop a pepper. But Seyfarth says
the benefits far outweigh any inconveniences.

"They have a
better understanding than I ever will of how the body functions. And
they can inform some of the decisions we make," he says. "I love having
them here."
This is the culinary medicine program's inaugural
year. But organizers hope to train more Tulane medical students and
Johnson & Wales culinary students together on each other's campuses.